Because I already remember a good chunk of this game, not everything is a surprise to me. At this point we see the return of the undead from the first two levels, except now the developers are more clever. The developer of a level has a bunch of good advantages when it comes to designing ambushes in this game. I'd argue that these are much better than the typical monster closets more typical at this point in time. Teleporting enemies, are of course, a cheap trick. 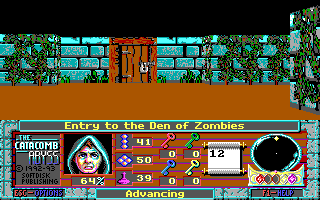 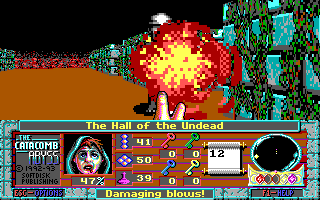 I still don't know how I activated this guy, must've been hiding on a corner tile. 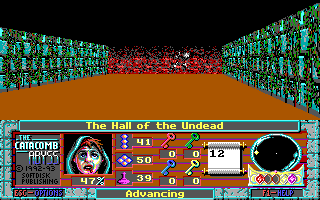 The opening area is a grand hallway, "Hall of the Undead" if you will. Ordinary walls on the northern and south sides, with passages to different levels in the center, other rooms where applicable. Two dirt walls on the west/east axis, no doubt where the place either collapsed or the contractors stopped getting paid. 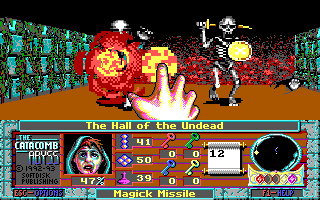 Or option three, the contractors are all dead. Why, yes, the zombies are coming up from the ground and the skeletons are coming in through the wall. Who knows how many there are?* 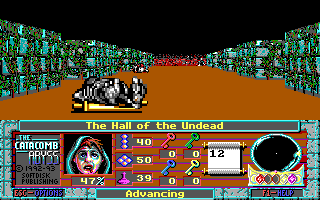 Of course, turning around also activates the other monsters. This room is very symmetrical. Clearly, Nemesis has good taste in architecture. Of course, since Nemesis's minions built this place, this was all clearly planned. Nevermind how these scrolls I'm collecting got here. 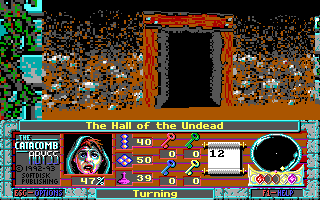 These are Quake-style doors. Walk in, they disappear. Can't shoot them. When I go in, there are many skeletons in the wall. I don't know how many of them will become enemies. You see, its not always true that a skeleton in the wall is a skeleton you have to kill. 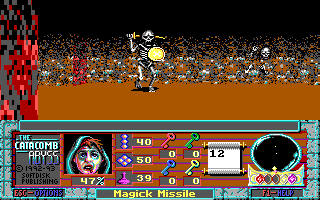 For instance, this guy dies like so many of his brenthern, while the other guy hides in the wall. Sometimes they mix this up and have the skeletons pop out after activating items, maybe its a longer delay. Does it really matter? "A large dusty room" has nothing in it but a door to another room. What's the next room? 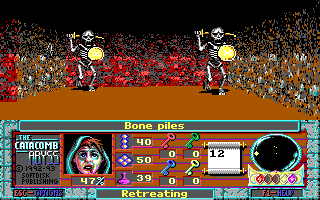 Didn't really plan it, but its amazing how well this works as a Halloween game. On the other hand, nothing is really a threat unless you suck or are young. As it turns out the room called "Bone piles" doesn't really have many more than other rooms. The next room, has more and mentions nothing of bones or piles. It also has a key, no doubt for the level's exit. I still have some exploring to do, and there's probably a gem somewhere here. As I go back to the central hallway, I discover that the doors are helpfully called "Open cavern entrance". How useful I guess. 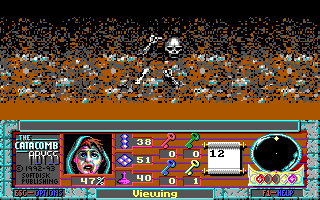 Right across the hall, a single pile of bones stares at me. Is he an enemy? Yes. Yes he is. "A Musty Room"? Aren't all these rooms musty? What, does "Bone piles" smell like cherry orchids? Musty room has several skeletons, some of which wait a good long time before popping out, could ruin your day quickly. "Cramped corridor" has a skeleton that woke up somehow, and I have to figure out how that happened. 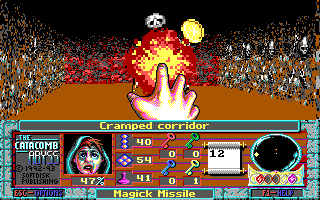 Was it this? Nah, but computer philosophy isn't my strong suit. If you're freaking out over the line of skeletons on the right, you haven't been paying any attention. Those are the exploding walls. Its the skeletons on the left you should worry about. After some more magick missiles and a staring contest with a wall, I journey away from the exploded wall. 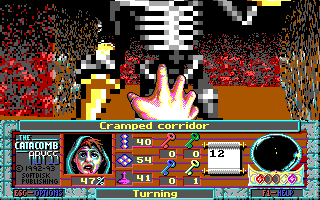 Once again, completely blindsided. Once again, not actually hurt. "Haunt of Skeletons", again, not the most skeleton heavy part of the level. It contains more items than enemies. Right, what's behind wall of bones? 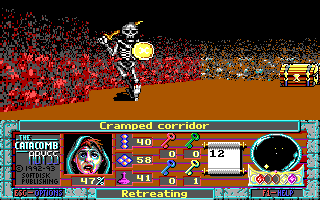 Treasure, and skeletons. Now we're talking. "Hidden treasure room"? No, that's not it either. Unless the words hidden and treasure are not supposed to be related. Hidden as in hidden skeletons that are sneaky. That finishes off the eastern side of the level, how about the western half? Starting with the south door. 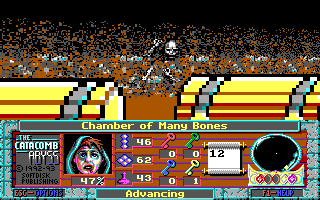 Oh, look, another area that alludes to having lots of skeletons in that don't show up. What, is this some kind of surprise after I get the treasure? 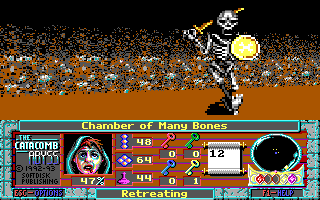 Yep. Fortunately, I have many friends to help with this. 64 at this point, but I think I'm going to lose a few of them. For once, the game hasn't lied about a room. Nothing else here beyond this. I wonder what's in the final area? 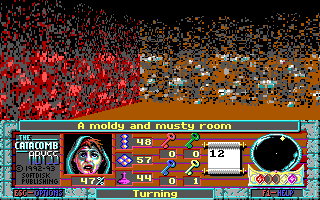 Oh, "a moldy and musty room". That's certainly going to be a unique smell among all these rotting corpses! A skeleton and a zombie. What a surprise! 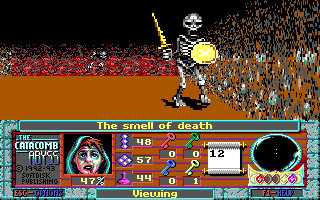 Really? Really? I guess they really did smell like cherry orchids. And a room after this called "Chamber of Good Things" that actually only contains good things? And a green key? What's this game trying to do? Lull me into a false sense of security? 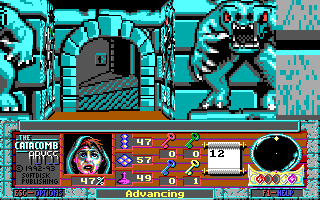 Oh, the only thing left is the exit. How undaunting. I guess its intended to artificially increase length. As I ponder this a single zombie pops up, undoubtedly to screw with players just like me. 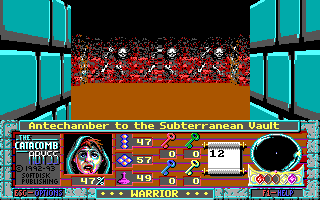 It's really called Subterranean Vault, huh? Imaginative. What's next, Underground Cave? Those exploding skeletons you see hide a bunch of chests. No skeletons hiding in the walls yet. Very interesting. In fact, for a good half minute, the area doesn't even seem to have any enemies. There is an enemy in there, of course. There's some treasure on either side of the opening area. Just the side passages. They don't go anywhere. 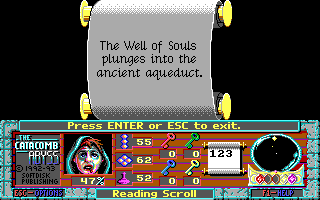 That's rather helpful. Who wrote this? 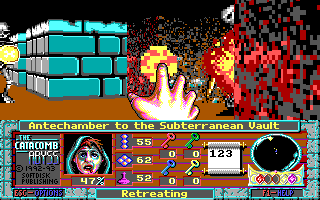 Of course, now the skeletons decide to pop up. Thanks, guys. After dealing with them, I am at a loss of ideas as to my next move. The area doesn't really have an obvious out route. Or that's what I thought at first. I make my way to a group of wall skeletons. Get rid of the wall and... 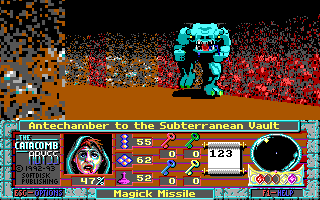 This thing. I think they're trolls, but they're the multi-colored generic giant dude that plagues the later levels. They all deal a lot of damage and soak up some punishment. I'd say they're the biggest flaw of the enemy design. They don't stop moving whenever their pain animation is triggered, but they don't attack.
You know, I realized I've come this far and not mentioned the pain system. See, every time you hit something, you activate it. This means that single enemies aren't very difficult. In packs, you aren't assured survival. Packs of trolls and up and you're screwed. Fifty magick missiles later and we're in the "Northern Tunnels of Gloom". They're tunnels and can be slightly confusing, but we're still not at Wolfenstein 3D levels of confusing yet. They do eventually give way to the "Southern Tunnels of Gloom", which lead me to another hidden chamber. Gee, another hidden chamber I waltz right into. This is like someone hiding a bunch of Playboys in their closet. Technically, it is hidden, but any sort of search will reveal it. 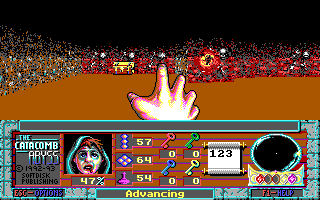 Golly, Big Jim's done hidden another chamber behind yonder chest. How will I ever discover it? Lawlsy, lawlsy. I better tell Mike that he needs to hire a level designer that doesn't put obvious statements in front of the secret chambers. Lawlsy, lawlsy- 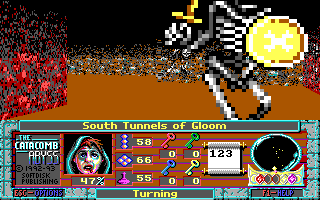 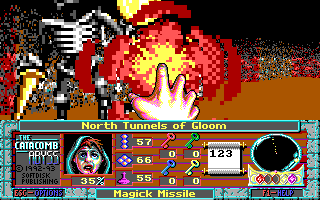 Okay, this is waking me up. I feel alive again! Shame that won't happen to my new friends. 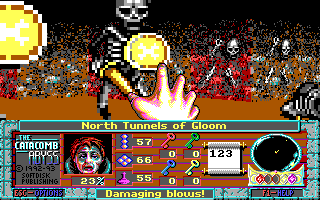 Wow, this might kill me. You know, if I didn't have 55 potions. After taking a little too long to use some exterminators, I slowly walk back to another hidden chamber, after finding it again. Only to find my search for it has resulted in more skeletons popping out. 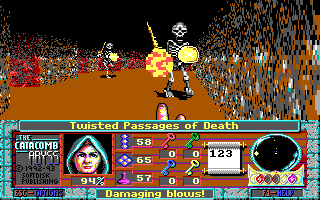 "Twisted Passages of Death", well, I'd argue that was "Southern Tunnels of Gloom", but then, I've never been paid to make levels. The passages twist and lead to more hidden chambers, except these aren't even hidden, they're open hidden chambers. The passages aren't that full of death either. Sure, a few skeletons hide so far in the dirt that they can't be seen at first, but that's easy for me to get rid of at this point. 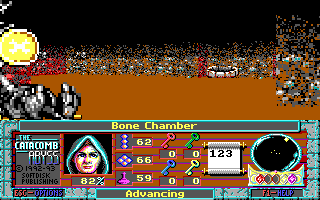 The well is already in sight? Huh, okay. Its not that its easy to get to, those skeletons put up quite a fight. A lot of them pop out here. It earns the name "Bone Chamber". Although, some of the skeletons are in "The Chamber of the Well". There's another little side chamber that has a troll and two chests in it. You take the second chest and a skeleton pops out. Clever.
And that's this section of Catacomb Abyss, next, we'll find out what's in that well. Although, I think I already mentioned what that was. Oops.

*Answer, you, if you look in the game files, but do you really want to know the magic?
at October 23, 2019
Email ThisBlogThis!Share to TwitterShare to FacebookShare to Pinterest
Labels: Catacomb Abyss