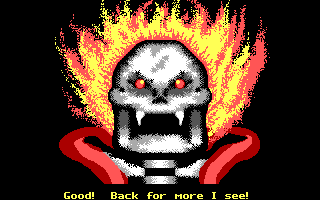 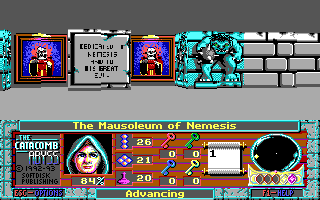 The area starts off with several portraits of Nemesis and several statues of trolls. I understand the portraits, but why statues of trolls? Why are they a completely different color than the surrounding walls? There's Nemesis's mantra again. 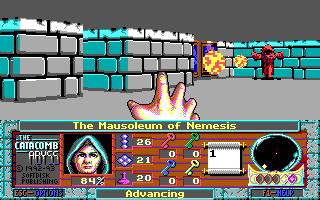 I see someone's heard the commotion outside and just has to get away as fast as possible. These are what I call necromancers, but judging by my track record with calling things necromancers, these are probably called Disciples of Nemesis. According to the Catacomb Wiki, they're called mages. Presumably that's because one of the levels refers to mages. I don't really care. They're necromancers. 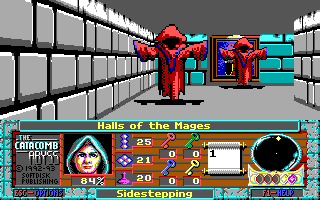 The necromancers are much like the ones in Heretic, if you're familiar with that game. They jump around like freaky maniacs dodging your shots as much as possible. Unlike that game, they don't move vertically, they don't shoot three orbs back, and they're usually placed in tight place. I give chase, blast him, and another one pops up, flees and I give chase.
I can't see them on my radar right now because they're red enemies and I don't have the red gem. The previous runaway has stopped here, where he is joined by another friend. Screw it, I use a zapper. Takes about half of one to get rid of a necromancer. His friend doesn't elect to flee, so I finish this farce. This might have been because he couldn't flee any further. Portraits on one wall, with an ordinary wall separating them, portraits on the other, all grouped together. This requires pondering. 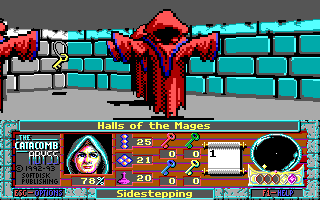 Three at once! The horror! An exterminator later, safely away from any treasure. My patience is rewarded by putting my stores slightly above what it once was and a key. "Meditiation Chamber", so they just teleport out? 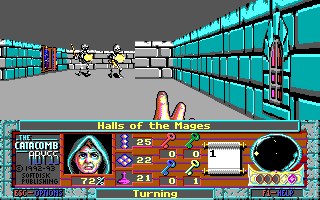 I go back, checking the walls as I do. Lo, and behold, skeletons awaiting me as I turn back. Enemies aren't alert if you don't see them. That seems very exploitable, but I guess that's to save on memory. Remember, this is 1992, if you throw too many enemies at the player at once you'll quickly regret it as the computer blows up. 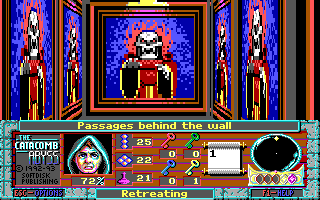 Putting aside the secret here, what's the point of this area? You have...several portraits, of which if you blow up will reveal more portraits behind it. This is a wall made out of portraits of Nemesis. I have many questions about this and none of them really make any sense. Back to the starting area, I only went to the southern half so far, don't want to go to the back area just yet. 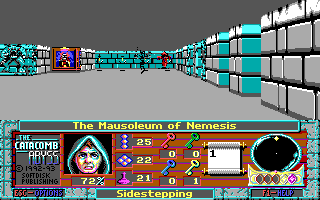 More enemies being honorable and not shooting me in the back. The wiki calls the shadows Wraiths. I don't really care, but I think you should know. I carefully plink some shots at the shadow before rushing the precious treasure. The shadow and the necromancer quickly fall soon after. Naturally as I enter the northern passage another necromancer shows up. After dealing with him I look to the east and fire off a stray shot. 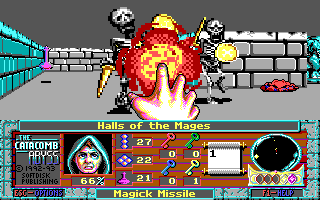 Another necromancer pops up as I turn back. That's not a problem. Skeletons behind the destroyed wall? Not a problem. The back area catches my attention. I slowly advance, taking care not to destroy any walls. A group of necromancers are on the access to the next area. They're not a problem, either. I already have the key, I just think its best to fully explore this area. Never know where that gem could be. 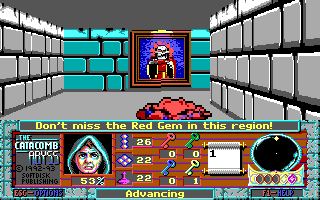 I blow up the wall across from the crypt access, checking my corners as I do so. Only one way through. Should be easy. Necromancer pops up, blamo. A subtle hint as to my current wisdom. And... 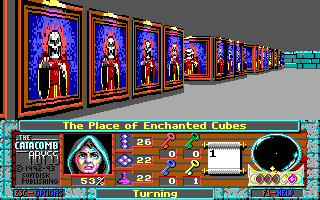 This is big, I carefully look around. So carefully that a necromancer spooks me. He's down, they barely do any damage anyway. I use a cure for once. Some treasure and more enemies, fine. The only thing left's the "Enchanted Cubes". First one contains some nice chests. Second, shadows. Blow up the third with skeletons in it while dealing with them. I carefully move out of the way of the fourth before dealing with them now. The fourth has a few necromancers with the gem. It could blow up. I'm not taking any chances and carefully shoot the necromancers. 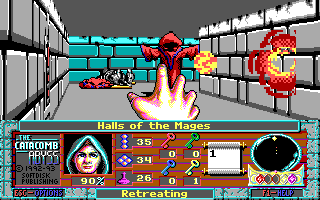 I wander around a bit, going after the side areas called Spirit Chamber. They had treasure and skeletons in them. I finish up with the other Meditation Chamber. More necromancers, which might be a problem if they did more than four points of damage per magick missile. On to the crypt! 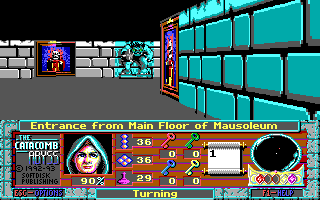 Look at that radar. Sneaky. But no match for me. Probably ever. Now, let's take a look around... 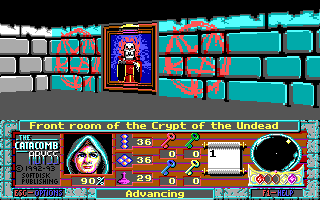 Things the Catacomb series did first:
FPS [X]
Hub Levels [X]
Fantasy [X]
Satanic Themes [X]
Naked Women [ ]
Verticality [ ]
Science Fiction [X]
Stepping Sounds [X]*
I check the other walls for treasure, since I don't really want to think about Mr. Satanic Messages here. In my haste to ignore him, I end up killing his friend who hid a chest and a necromancer. The only cursed thing to happen to me is a shadow joining in on the fun. 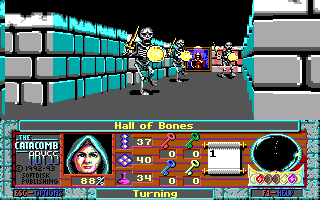 I understand why this game caused me so much terror as a child. Enemies frequently show up as you turn around. This group happens after I've already cleared out everything on the east side south of the start. Probably because this is the only major gameplay loop. The corridor behind them reveal a series of rooms full of the dead. 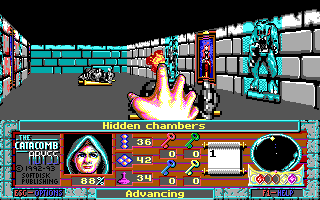 More undead. I think this is another area that completely loops in on itself. The way further south has what has got to be undead #36. I guess that means the area west leads back to the start? Nope, that leads to a treasure room. I guess I better check the next room out. 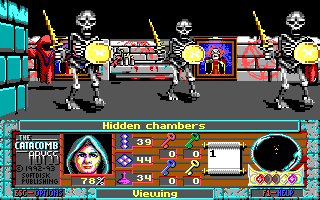 A sacrificial altar. You sure we don't need a priest here instead? Depending on if this is supposed to be D&D-like it might be obnoxious for Tyr to keep throwing Hammer of the Gods at these guys. Better have "Words Constructed from a Dartboard" deal with it. The sacrifice room doesn't lead anyway, but it looks cool and has a key. That's what counts. So I go back, through the "Hall of Bones" and the "Meditation chambers". Quick a zen-like level, yes? 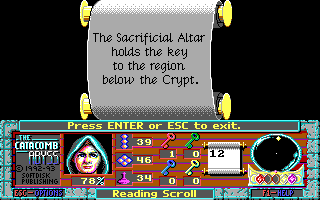 Returning to the start, and destroying the first wall I really saw. I fight a necromancer over an embarassingly long amount of time before getting a scroll I should have already gotten. More carnage ensues thereafter on the other side of the room. I could show you, but you know how it is. Point, shoot a hundred times, collect any treasure you didn't destroy. 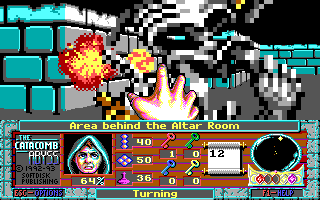 I continue through a few enemies, before I find two shapes on my radar I can't yet see. Interesting, that's the first time that's happened. They're shadows, and while I look around another appears before treasure. Carefully dealing with him and adding to my ever-growing arsenal, I slowly advance. A skeleton awakens, proving that there's something wrong with how this game causes enemies to become alert. 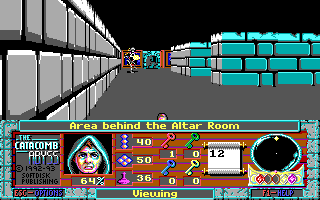 I little bit of tactical retreat, getting the shadow on my tail, before blasting him, going after the other. Finally, no more enemies. I turn around and see another skeleton. Well, how did the shadow get behind them then? Questions, questions. This is something the great philosophers will have to figure out, because I just don't care. A little bit of cleaning up and blamo, the crypt area is done. Next time, Den of Zombies and the aquaduct.

*There's not an easy place to put it, but there are really nice stepping sounds in the game. They're not distracting at all.
at October 14, 2019
Email ThisBlogThis!Share to TwitterShare to FacebookShare to Pinterest
Labels: Catacomb Abyss