Previously, I left off at a well at the end of the two undead-infested levels. I have to wonder about the design of this game for a section. Okay, this is just something Nemesis's minions have built yes? So therefore the two preceding levels must have been unfinished levels, presumably the skeletons are the workers. This makes more sense in Den of Zombies, but presumably nothing much has been built in the Subterranean Vault. This would explain why I'm forced to go through the sewers here. 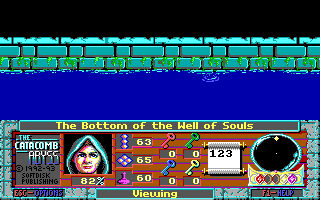 I didn't get a shot of the entrance, but it was a solid square covering the immanent area. The area after this is a wide area surrounded by walls with the odd water vent. One of the area descriptions helpfully tells me I should try to find the blue gem in the region. 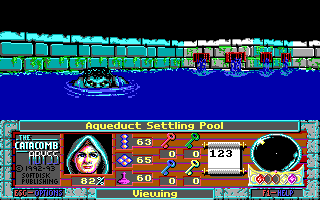 The water bubbles, are of course not actually water bubbles. They are signs a troll is there. I remember this causing me much anxiety as a youth. If you don't blast him down right away, he'll hide under the water again. This is slightly easier to deal with than the regular monsters, who don't pop out. I wonder if this is specifically associated with the water ground type or if you can have these guys over anything. There are two little vent corners in this room, each holding another one. 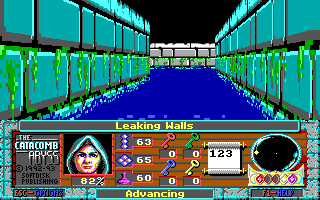 Right up against the breakable wall, I don't know whether to praise that or complain. After that, a room with a quasi-trap. A troll in front of a chest. I lose the chest. I carefully make my way through the "Aqueduct Northern Channels" making sure to eliminate each troll as I find them. 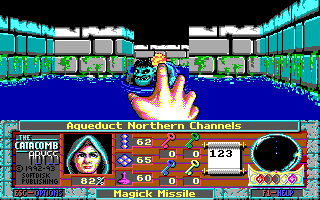 A grouping of them hiding inside some kind of treasure room proves to be more time-consuming than challenging. 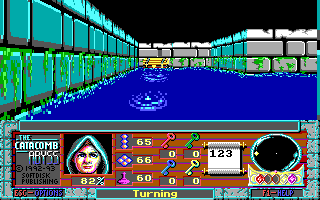 This trick is then followed up again with the same trick. If this level had more substance to it, I wouldn't need to mention it with a picture. Not the best level I feel. Very confusing. 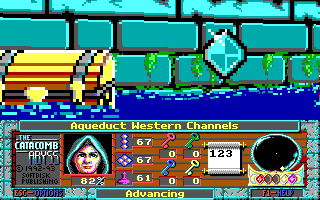 But when you get down to it, having a blue gem protected by a pack of trolls makes sense. I can now see all my enemies. All the enemies so far. And there's a troll out there somewhere. I activated him and never saw him. After I take care of him, I find another treasure room. Somehow I manage to slip all the way to the southern channels. I can't help feel that so far every single encounter has been the same. This seems to be the extent of the area I'm able to access from this side of the start. I go over to the other vent out of the opening area, fight another troll right against it. 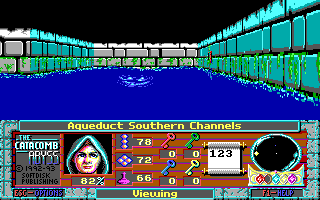 A single troll all by his lonesome. A strange choice in this level. His nearest friend several seconds away. In fact, these aqueducts are far more lively than the other ones. A treasure room here, with the chests blocking off a troll. A treasure room there, with the chests blocking off a troll. After this, I figure I've cleaned this section out and must have missed something on the other side. I'm wrong and waste my own time. 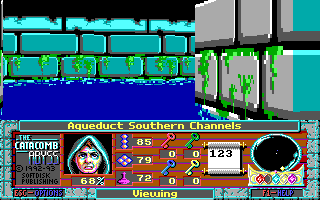 Coming back and doing a careful investigation reveals another vent. Hiding a troll who's trying to be sneaky, hiding behind the wall. I'm too smart for that. Another one tries this trick, this time in front of a chest as if that wasn't clever enough. 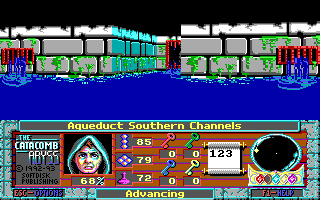 Hmm, this looks like an exit. I don't see any monsters. No monsters. 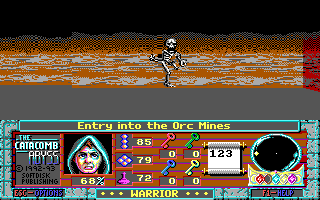 Orc mines. So full of orcs the first thing you see is a skeleton walking out of the wall. 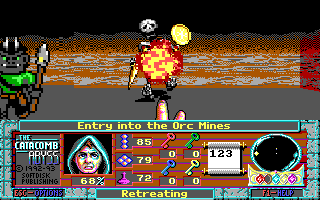 That really changes my opinion of this level. Why stop here? Why not throw a couple dozen trolls at me? A few demons. And a hundred necromancers for support? And make the whole floor lava! 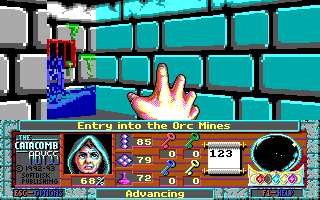 "Don't miss the green gem in this region" and pretend you didn't see this graphical error. I guess I expect this kind of level design from an modder. I guess that's true in spirit in this case. Pair of exploding wall skeletons cover the way out. 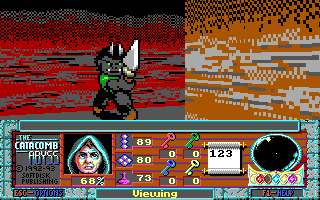 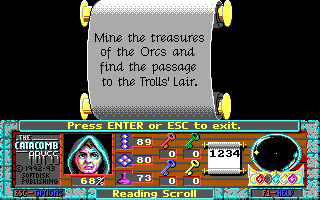 While I am grateful for the info, I have to ask myself, who is writing this? This is right behind the orc hiding behind the chests! Why would the orc write that? How did anyone get in here? Do orcs pull the same move as the skeletons, but they just don't show it in-game? Were there recent collapses in the mine? A kind orc waits for me to finish asking these questions before attacking me. The west area leads out, to the clue as mentioned here. The east area leads further into the mines. 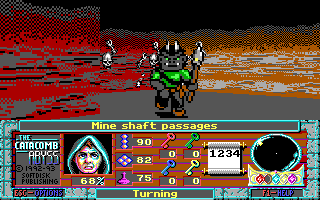 Another second, another orc. They're nice, not very troublesome enemies, capable of doing damage that, in another game, would be the low end. The passage breaks off into two areas here. One north and one south. Both are covered by exploding skeletons. I go south. Its very densely made. Its very quickly makes a sharp turn and goes east, where two orcs wait. Here, there are two passages north, one of which leads to a room just full of skeletons in the wall. 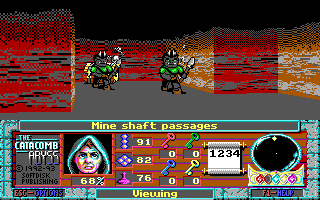 Wall skeleton room turns out to lead to another secret treasure room. I'm sorry, "Hidden storage", where four orcs have packed themselves into a room. The eastern of the two passages is a long winding one with two obvious exploding walls. 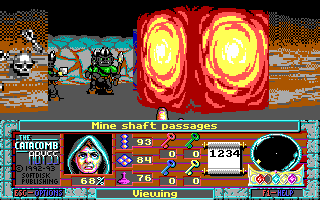 The first of these appears to lead into a room made with solid stone walls. A horde of orcs are inside here, and while they have me distracted, a skeleton and another orc pop up from further down the passage. 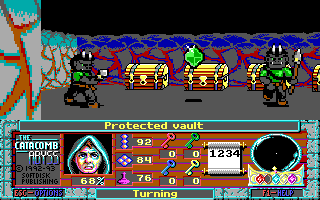 The inside of the solid stone room has the final, green gem. I back off as to not accidentally destroy it. The orcs don't take the bait so I advance a little to get a clear shot at them without harming the gem. You have to line up your shots carefully sometimes. 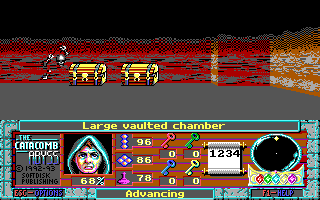 The end of the previous passage leads to a "Large vaulted room". Two chests apparently make a vault. Naturally, two skeletons appear here, eager to ruin my day. The area is otherwise clear. A passage out of here, labeled "Mine shaft passages", actually looks the part...as far as a room with no supports can look. From here, are two more exploding walls. 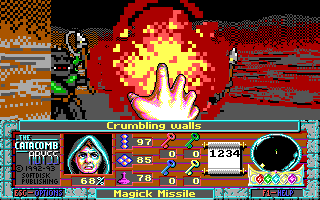 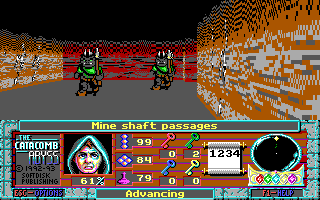 Back to the first north/south split. The northern half has a horde of orcs. Another pair of passages reveal themselves after that. This level sure has a lot of splits. 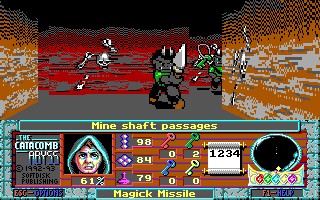 Another key already? The western split has this key, some treasure and some orcs. I've hit 99 zappers, so I can't collect anymore without using one. I suppose that's the big flaw with this game, its easy to get a lot of supplies because you aren't going to be using them against most enemies. Key word, most.
Meanwhile, the eastern side of the split has a orc and more treasure. I carefully try to take care of him but end up destroying a chest anyway. That'll ruin my high score. There aren't any secret passages in either of these two areas, which is bad because I suspect I need more than 3 keys. So, for some time I try futilely to find another key. Maybe I'm wrong, let's see that exit area. 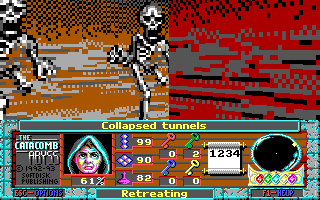 More skeletons in the walls. You'd think there would be some orcs or trolls in the passage out, but no dice. The passageway to the next level is just a non-stop barrage of skeletons. Sure, after the second key, there's some orcs, but its a surprisingly orc-light orc level. 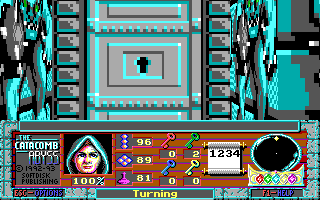 Wait a minute, if the trolls are next, what are the blue things I've been fighting called? Water trolls? Water troll. Next, another FPS first. Although in this case it'll be the second.
at October 28, 2019
Email ThisBlogThis!Share to TwitterShare to FacebookShare to Pinterest
Labels: Catacomb Abyss