Star Cruiser: Much Ado about Nothing 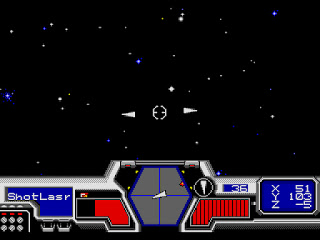 Space is big, very big, even on this game's vastly reduced scale, and that means I made a horrible mistake last session not noting where the asteroid belt is. Because I assumed that the game would tell me where it is. Slip up one time and suddenly everything's gone south. So I started this session my flying around shooting down hostile ships. That went well.
Now, while the game allows you to warp everywhere, you can just fly your ship through space to get places too. This wouldn't be a problem if I knew where the hell any asteroids were either, but he didn't give a precise location anyway, just a rough estimate. Is it up or is it down? 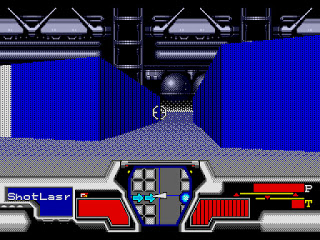 After a bit of exploring I travel to Station 2, where after exiting my ship I walk over a one-way floor, that's right. Of all the classic dungeon crawler stuff to include. Well, a teleporter takes me back, so it has that going for it at least.
So I return to Daigo, to get directions again...no, that would be too kind of the game. Guess I'll be exploring space until I find asteroids.
Aha, they're these green things on my radar. Since in the past those were missiles I obviously was trying to avoid them. This is boring. Flying combat has been fish in a barrel after I got past the intro fight, and fighting against something that doesn't fight back makes it worse. Even though using the tractor beam on the asteroids drains my energy like crazy its still a breeze. 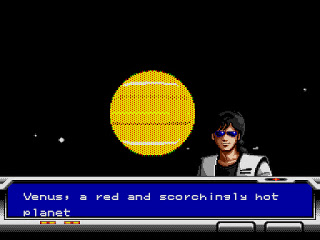 Give hydrogen to Daigo, then go back to the restaurant to advance the plot. Apparently the waiter here talked to his sister back on Earth, some boob lady I barely mentioned, and knows I was there. Anyway, Musashi tells me about my next destination, Venus. There he's going to hold a Hunter meeting at the Kinen Festival. Or the Memory Festival.
Back with Daigo, he's not yet done, so me and Freddy examine the data we got. The Star Cruiser is missing a B-system, no the game doesn't tell me either. Then we get a list of VOID targets...and the next one is Venus and finishing off with Mars. Guess I know my destination! And my near and dear friend Gibson is restored too. This does mean that before we go to Venus we have to get his starship from Earth. 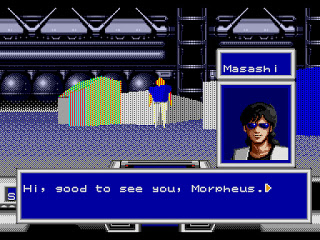 Venus looks remarkably like Earth, but less green. We tell Musashi about the attack and he says we should go to the police. Now comes the fun part of the game, where I have to enter every building trying to find them. It takes a while, but I do find the Federal Chief in an arcade and a suspicious character in a bar. 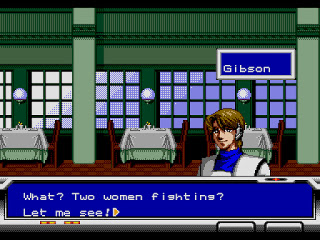 So I go through every building, and there isn't one for the police. Logical answer, I missed it somewhere in the spaceport. Once I'm back there someone bombs all the spaceships. And guess who gets blamed for the incident? That's right, us. 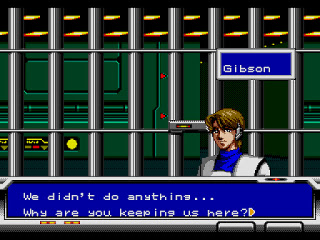 Once in a jail Masashi and Gibson start plotting a jailbreak. Based on how quickly the Federation threw us in here and how unpleasant it is, I'm starting to suspect they might not be the good guys. I have to help, I have no choice in the matter. A key I randomly picked up earlier opens the door. Huh. Now I enter combat, guess we're shooting our way out. 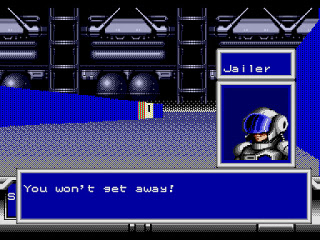 Yep, we're shooting our way out. Even if I'm just trying to clear my name here, this speaks remarkably poorly of the capabilities of the Federation that we have so little confidence in their detectives. And yes, the soldiers move around like the tanks and spaceships despite being the human model. 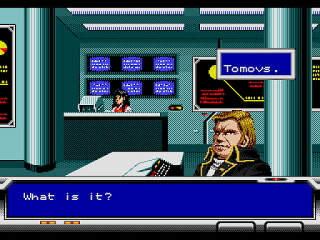 The person we have to talk to is the local general. He doesn't notice our approach somehow, apparently he didn't hear the laserfire and screams of the "losing consciousness" of his soldiers. He doesn't believe us, but he brings his other suspects in because we asked. 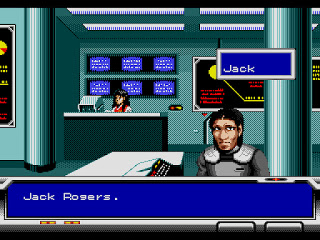 There are four of them, and their roles in the plot are fairly obvious:
*Diana Gaddis, who I am sure is going to be important to the plot later.
*Anna McCaffrey, who has boobs.
*Dave Clavius, who is actually David El Fan, a secret soldier.
*Jack Rogers, who I swear looks like the prototype of that Ao Oni thing, and is the saboteur.
We don't actually see any of this solved, but upon the revelation that the Dave guy is some member of a secret platoon, we find out that there's a VOID base here. Guess we're still all the good guys. I have to go and destroy it. Wow...this plot is getting really stupid. Now that I'm out, I see that the game straight up didn't allow the police to help me, because I saw exactly where their station is. 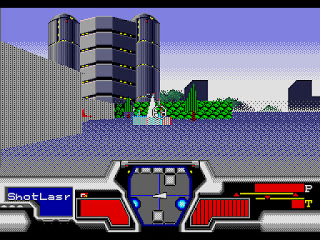 And guess what, I don't know where the VOID base could possibly be, which means looking through the entire town again. Once I only have the church left I brace myself for something really stupid, but it isn't. The priest tells me that someone is persistent in asking for a dead guy to be revived, RPG humor? Anyway, he noticed a strange man tampering with the fountain nearby.
I interact with it, and a card reader appears...wait, I have a key from Dave...is he the bomber? Huh. Anyway, this leads to the base, hidden behind some hedges. 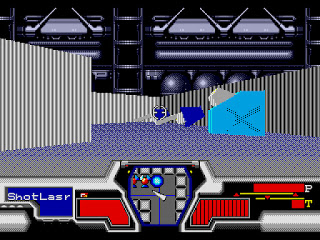 This place is not terribly unusual. Combat seems to be a bit harder, but nothing special. A bit more non-linear, but nothing obnoxious. Generous, but not something I'm ungrateful for. Nothing interesting to talk about, I collect the data I was supposed to get and blow up the base. Naturally characters in this game don't care that they heard a large explosion. 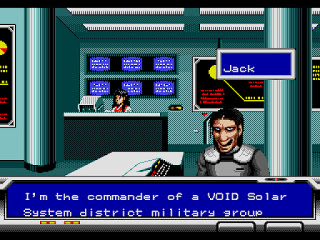 This proves all our innocence, and we discover who the rest of these people are. Diana is a Federal Patrol intelligence agent, while Anna is Dave's assistant, and Jack is the suspect, he nearly killed Gibson. Interesting, I forgot about that. Anyway, he's a general, his men were secretly here, there's a bomb here, and he's going to take my Star Cruiser. Glad that we've preserved some sense that the bad guys are actually worse than we are.
The time bomb isn't too challenging, but I did have to open a bunch of doors. Jack stole the Star Cruiser and went to where else but Mars. Our good general, the Federal Patrol one, is gearing up to have a massive space battle against him. It seems that me, Gibson and Diana will be joining the general for at least a short while, since she wants to go after him and I have no ship. Or I'm just going to take Gibson's ship. I can just go to Mars from here. Not sure why we needed all the confusing plan of action, but I suspect something has been lost in translation.
On Mars, we get a call from Admiral "Tommy", our general/admiral with the Russian name I can't type. Gibson is going to be doing something with him and I have to find the Star Cruiser. Now its up to me and my new friend, Diana to find it. By exploring the town again. This game is really getting on my nerves. At this point what don't I hate? Slowly walk around a town, into the same 5 buildings, to the same 5 people, with the same slow walking speed. I really hope I'm at least at the halfway point for this game, because I'm not sure how much more of this I can take. Even managing to find a secret wall, which of course leads to a sealed door, doesn't improve the experience much. 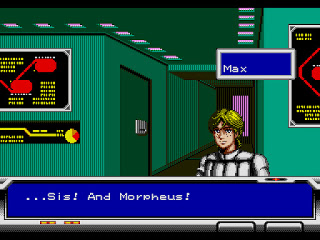 Finally, after exploring everything, for far too long a time, I enter the local university, where Max is. Apparently Diana is his sister. Some stock "Don't be in the military, its dangerous" speech and I'm told that the Star Cruiser is west of the dome. Turns out the secret wall is the one that leads to the place where my ship is. Or is the switch that opens the door anyway. 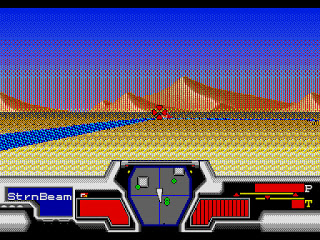 Once outside I'm ambushed by enemy vehicles. Hey, the game got one over on me for once. This is actually challenging and required me to use the homing missiles to survive. Hey, the game is interesting all of a sudden. And the game ruins it by making me hunt down a switch before I can enter the location proper. Once inside the game returns to being business as usual. I should explain, the only difficulty in combat so far has been that enemies move around constantly, almost like a dance. When they do this, they completely ignore the player as an entity and walk through you. Meaning that depending on where you are, the enemy is just unloading missiles directly into you. As such the only real way the developer has to increase the difficulty of the game is to put the player into situations where they have to dance along with the AI. 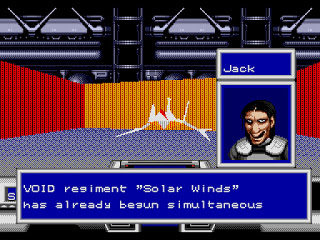 This level hits me as a particularly annoying example of that. By the time I reach Jack and we have our climatic boss fight, I'm even more sick of the game than I was. I'm too late, their regiment is going to attack Saturn, that's where Admiral Tommy is. That's where me and Diana are headed next...or at least after I return to Mars to resupply...and we'll get there next entry, because honestly, I am not feeling the game right now.