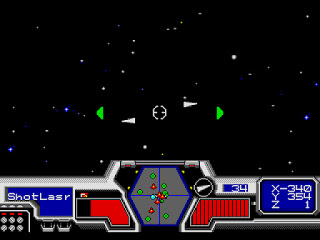 There's a fleet outside of Saturn, and holy crap, space battles are difficult again. Good, just what I wanted. The real sticking point is that these ships just won't die. I just barely manage to survive the fight, and at such great strength depletion that I don't have enough energy left to reach another planet. I set down, hoping that there's a repair bay somewhere, or at least some energy pickup.
Saturn, or more accurately, Titan, starts of blue and like your typical "outdoor" scene, but thankfully a friendly outpost is here. Ah, good, that would have been annoying. Now, what's here? Nothing, nothing but the repair shop and a military bunker. 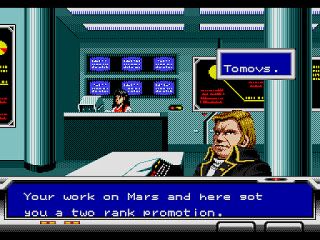 The good admiral whose name I can't remember is here, as to be expected. Right away, he tells us that Diana has gotten a few promotions and is now Major Diana. I would be disappointed I didn't get one, but I'm apparently a hunter, which means I'm too cool for ranks. If I had a portrait I would be wearing a leather jacket and aviator shades. 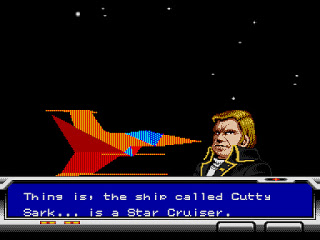 Our fleet has been taken out by VOID's forces, and while I took out theirs, one ship got away, a Star Cruiser by the name of Cutty Sark. Why do people insist on using that silly sounding name? Anyway, its off to Io where Gibson has headed, since that's where the Cutty Sark was from. 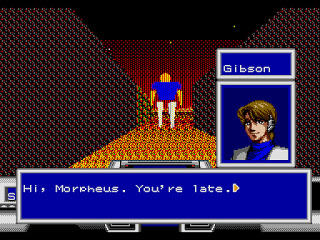 By the way, this area is subtly changing in color. Its very annoying, and by very, I mean eye-searing pain on my part. Its a maze full of enemies, and my heat shield is slowly draining. Wow, this game got worse. I wonder how this game is going to continue to make itself annoying as hell. One needs to find two elements, an entrance into the enemy base and the key. As I enter I meet Gibson on his way on, he'll be at the old restaurant. 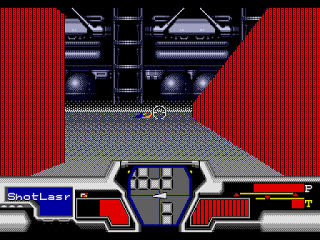 Inside the base I find myself getting injured and losing more and more. Partially because they're doing things like having two enemies in a row, so I can't just spam my laser attack, partially because I'm getting tired of the game. I've taken to long stretches without the game's sound and my own music.
The real objective of this mission is just to pick up whatever equipment the Cutty Sark has. To this end I find a Photon Drive, and a Nuclear Shield, of which I need 2 to win...okay.
Back at the restaurant, we're waiting for a call from Tommy, our admiral. I know it sounds like I'm leaving out a lot of the plot going on, but I'm not, its really that strange area between an actual story and mindless fluff.
Anyway, outside of the admiral wanting my "friends" to meet him wherever he is now, VOID has offered a deal. The Star Cruiser in exchange for the Gravity Catapult. I am unsure who's giving who, since all I remember was a plan to take the Catapult. I have to go to Earth...I guess because I'm going to fight VOID again. This game feels like its getting longer and longer without much for me to talk about. It also doesn't help that every time I quit and return I have to check what I've written because otherwise I completely forgot what my next objective is.
On Earth I'm not quite sure what or where I'm supposed to do. Everyone is talking about how the Information Center's computer has gone haywire, but that could just be because it broke down the last time I was here. That is a valid option. 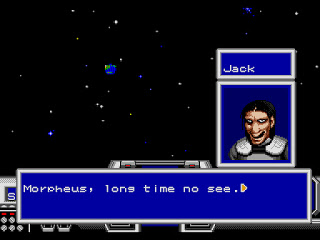 Oh, I was supposed to wait outside the planet, gotcha. Now its time to fight against the Cutty Sark. I'm as good as dead, so says my foe, Jack. So after destroying the Cutty Sark the good Admiral congratulates me for saving the solar system. It actually was a bit of a challenge, I used up my entire stock up missiles, both the ones I can get more of and the heavier ones, to take him out. Nearly bite it too.
However, this is just the beginning. Not literally right? We're at least someway through the game? VOID is going to be doing more fighting at...Alpha Centauri...? Wow, we're getting out of the solar system. Also, I need to be concerned about Geist Nidoman, someone who is at least 200 years old, whoever the hell that is.
This has a couple of problems, first, with the death of Jack we've seemingly cut of the head of VOID, and secondly I have no idea where to go to get to Alpha Centauri. The answer to the former is that Jack is hardly the only leader of VOID, I'm sure, and the second is that this is what the Gravity Catapult is for. 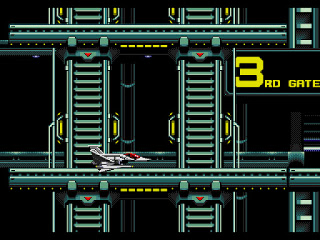 The Gravity Catapult is a full-fledged town, and the first building I see contains a restaurant, where Diana is waiting for me. Huh? She'll be with me when I'm at Alpha Centauri, fine by me, and gives me all the necessary stuff to travel there. 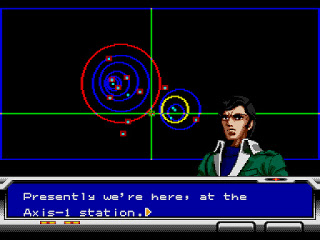 We get a nice travel sequence, and then a soldier greets us on AX-1, telling us that Admiral Edgar Nash is waiting for us. Nash seems to be a Sonny Chiba type of guy by the looks of him. We get our orders and a little bit of orientation for the new star system.
Basically, this place contains quite a lot of ancient ruins, and they named the planets things like Planet Barbarian, Fantasia, and Folder. The second star has a barrier preventing entry into most of it, and I assume we don't understand it. My next destination is AX-3, currently occupied by terrorists. Diana will instead be meeting an alien, named Carlin, on Planet Folder. Admiral Nash also gives me a hypnotic gas to use on the terrorists, which seems weird to me after blasting my way through a galaxy. 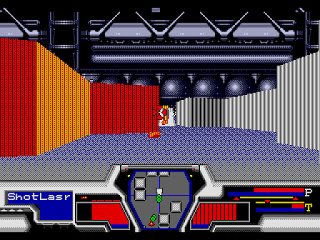 Curiously, the gas doesn't show up as a weapon. I guess I have to figure out where to use it. Back to your standard space station combat section. There is something out of the ordinary here, multiple floors. I didn't say it was very interesting, now did I? 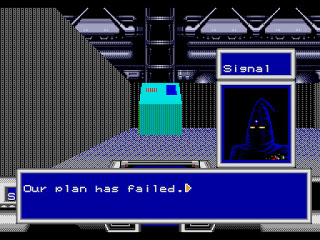 Along the way I meet a soldier who tells me to regain control of the station I should reach the control room. Thanks...? Once I reach that room, I find out who the new enemy are, a mysterious-looking black robed man. Time to use that sleeping gas I got. After using it, and they fall down, Freddy tells me it was Hydrogen Cyanide. Are we sure we're not the bad guys here? 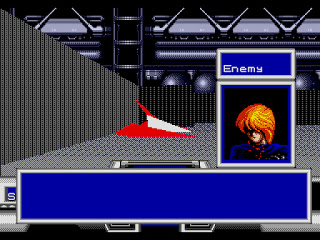 Holy crap, game, I didn't expect to be responsible for a crime against humanity. They have some stuff, which I take, including a card explaining that they defend humanity against ugly aliens. Which I suspect is just a poor choice of words at this point, since we're clearly not the good guys if we're gassing people.
This is actually something the game points out as I walk out, with the survivors on our side thanking me, but still pointing out that gassing them was "kind of harsh". 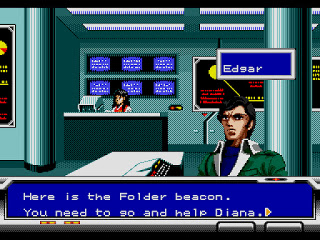 Back talking with Edgar, I get my orders to save Diana on Folder, because of course, and nary a mention of the poison gas until I bring it up. Yeah, we're going to get that, we change sides because the people we were working with were secretly the bad guys all along, plot twist. At the very least Edgar is going to turn out to be a bad guy.
I realize I'm harping on about it, but you realize how nearly every major space opera franchise has done this twist, in addition to a ton of major JRPGs?
I haven't mentioned it much, but as I traveled to Folder, I had to travel some distance manually, since I don't get significant range on my warp function. This meant I was flying towards one of the stations, which I didn't have a beacon for. I didn't mention it because the whole beacon system sounded silly anyway and the plot was taking me along everywhere fairly smoothly anyway.
Lo and behold, the game stops me dead in space because I don't have the beacon for that station. I guess this is a way to stop players from sequence breaking. (I know how painful that is) Not on the station, just so far away from the station I couldn't see it. 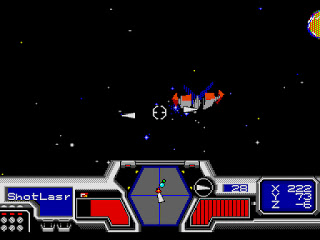 Arriving on Folder, I can't enter, there's a barrier. A ship exits, and we fight. Its not too hard, but I'm more interested in that the game doesn't have me talk it out with them yet. Yes, I am 100% expecting the game to shift gears because of this and I would actually be shocked if it didn't. I've been half expecting it since I had to shoot out of a friendly jail! 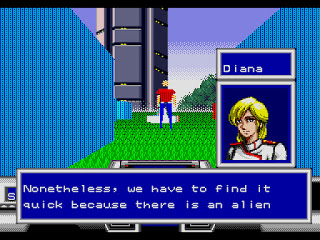 Another space station section, this time its green. The layout's a bit confusing but I preserve. I find Diana pretty quickly, apparently the alien ambassador is being held hostage and we don't know how to enter the enemy base. Oh, look, I have a card without any obvious data on it, and I can use an item on Diana. She says its a key! And the base is nearby. 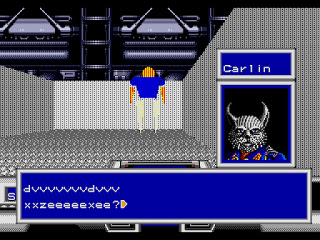 We're locked inside, but the combat continues. Its not terribly unusual at this point. A boss fight, and then we have the ambassador. He looks like one of those things out of Wing Commander. I can get out of the base fairly quickly, but where to go next is not clear. 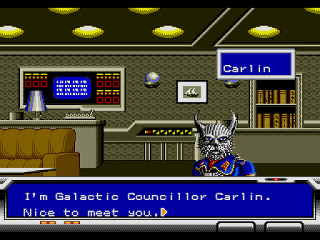 Eventually, I check the other switch door, and end up in a maze. After a bit more time than I would have liked, I'm at the ambassador's quarters and he can now speak something I can understand. The plot thickens, because his security is incredibly tight and yet enemy soldiers, implied to be VOID, kidnapped him past this. And they were incredibly polite.
I can use an item, and without really thinking I try the first card I got off the gassed soldiers. This was a distraction so that their fleet could take Fantasia! One of the planets here. First, we'll be going to AX-2, then to Fantasia, because we need to get a beacon from Max (her brother) on AX-2 and that's the only place Diana has a Beacon for. This isn't unnecessarily complicated at all. I'll leave off here since I've solved most of the important problems for now.